Last night, as I was prepping my lesson, I reflected on the fact that there are three texts that I have taught for more years than any others: The Absolutely True Diary of a Part-Time Indian, Antigone, and In the Time of the Butterflies. It’s no coincidence that these are also among my absolute favorites, both to teach and as a reader myself. I’m teaching Butterflies right now in class, and in this sixth time through, while I rely on my approach from previous years, I am loving finding newness in this story.

There is a scene at the end of chapter six in which Minerva is describing her journey from a meeting with Trujillo in the capital back to her home in the north of the country. Along the way, she describes the rain in each city she passes. Not only does this create a foreboding and depressive mood, I’ve always interpreted the rain as a motif for Trujillo’s absolute, oppressive control over the DR and its people.

“We’ve traveled almost the full length of the island and can report that every corner of it is wet, every river overflows its banks, every rain barrel is filled to the brim, every wall washed clean of writing no one knows how to read anyway.”

Out of curiosity, I opened up Google Maps and entered all of the place names Minerva describes on her trip home. Seeing her route up the autopista Duarte, the north-south spine of the Dominican Republic, gave fresh context to the totality of the rain, and by extension, Trujillo’s regime.

A few weeks ago Julia Alvarez came to Lawrence, the city where I teach. Her visit coincided with the start of my Butterflies unit and I invited my students to attend her evening lecture at the public library. It has always been important to me that my students – most of whom are Dominican, like Alvarez – have access to their literary heritage. It’s more than simply curricular representation; rather, I strive to give them access to the nuances of Caribbean and Latin American literature and how history and identity have shaped a distinctive literary culture. In the same way that white students in the U.S. have internalized Eurocentric archetypes, plot structures, and literary features as an extension of Anglo history and culture, I want my Latinx students to be able to articulate what makes writing distinctly Dominican, Puerto Rican, Latin American, etc. The students who attended Alvarez’s lecture were enthralled to hear her describe the context that gave birth to her writing career because it is a context that is familiar to them. Many waited for over an hour after the lecture to meet Alvarez personally and get her autograph in their copies of In the Time of the Butterflies. 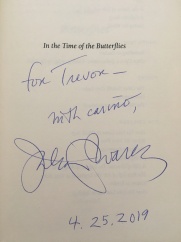 As a relatively new student to Latin American literature myself, hearing Alvarez helped me broaden my own understanding of what makes her writing distinctively shaped by her lived experiences and the history of the Dominican people. Here are some of the most memorable things she said during her presentation:

“I believe in the power of stories to change the world.”

“One of the first things that happens in a dictatorship is that books are confiscated.”

“I’m a human being. Nothing human is alien to us.”

“Stories give you animo.”

“I learned about storytelling from people who didn’t know how to read or write.”

“Things you love are hard.”

Finally – and notably – Alvarez also described that the first book she treasured as a child was 1,001 Nights. The core of her message about the power of stories was rooted in the lesson of Sheherezade’s persistence to change her fate through storytelling.